A tale of two fires and what it means for India 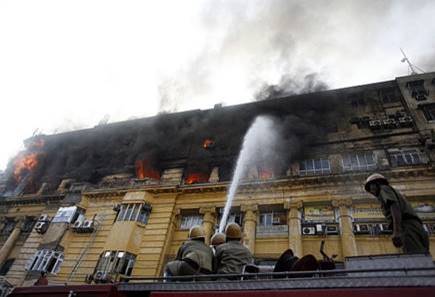 In the recent past, two major fires in cities on either ends of India – the Crystal Tower fire in Mumbai, the Bagree Market fire in Kolkata – have defined an urgent need for a different approach to fighting fires and saving lives.

First, let us examine the fire at Crystal Towers, a 16-storey residential building in Mumbai’s upscale Parel area. The incident claimed four lives and injured 20 others. Fortunately, the Crystal Tower building had open balconies, which made it possible for the fire brigade to use their hydraulic elevated platforms for evacuation.

Swift rescue operations with the cooperation of the public limited the number of casualties. However, this incident has raised a pertinent issue – rescue personnel must re-examine the decision to use lifts to douse a fire in a high-rise building, even in seemingly desperate situations. The structure of the lift acts as a natural chimney for the smoke to fill. In emergencies like the Crystal Tower fire incident, firefighters should completely avoid using lifts. A stark reminder of the danger of riding up elevators, is the incident in Thane a few years back where firefighters were found dead inside the lift due to asphyxiation.

The threat of death due to smoke inhalation is a bigger concern in high-rise commercial complexes, as the glass facades can hamper rescue by elevated platforms that can reach over 70 meters in height. Fire departments in large metros cities like Mumbai, Delhi and Chennai are equipped with state-of-the-art elevated platforms. But, smaller yet prosperous cities like Nashik and Nagpur with a growing number of high-rises, have limitations in the procurement of firefighting equipment. The lesson here is that a city must qualify for funds not based on the area alone but the type of construction too. High-pressure pumps and smoke evacuation equipment must be made mandatory in buildings to facilitate use by the fire brigade when required.

On the other hand, the fire at Bagree market, a multi-storey building located in the quaint area of Burrabazaar in Kolkata in September 2018, and again in February 2019 reveals the grim reality of the helplessness of the fire department to tackle a large-scale fire.

An alphabet soup of closely sandwiched stores piled upon each other illegally, Burrabazaar’s narrow roads are also crawling with encroachments that can make even the most prepared rescue operation a harrowing experience. News reports in the aftermath of the accident at the Bagree market last reveal that the overhead water tanks had dried up, limiting the source of water for such a grave operation. While fire sprinklers were defunct, several extinguishers on-site were past the date of expiry. Staircases and washrooms of the building had been rented out, making it difficult for firefighters to reach the upper floors– it took them 60 hours to douse the flames.

The Bagree fire fortunately did not claim any lives, but resulted in losses worth INR 80 Crore, affecting several livelihoods – take the case of this family that lost four shops in the blaze. A critical point to ponder here, is that illegal constructions are not only hazardous for occupants, but they also put a strain on the abilities of the fire personnel, who have to navigate an unpredictable layout, which may result in loss of precious time or sometimes lives.

What intersects the above incidents is the need for planned augmentation of fire services. While critics from across the spectrum harangue India’s ad hoc approach to formulating policy measures, given the profound implications for safety of life and property, expanding fire infrastructure in the country is an uncompromising necessity. Hence, augmentation must take a science-based route with emphasis on the following:

1. Implementation of the National Building Code (NBC)
The NBC lays down the guidelines for building regulations in India, which are used as reference for state or municipal authorities for evolving building by-laws in their jurisdiction, including those for fire safety. However, the lack of regulatory impetus for the code means that the states or the municipal authorities may override the NBC to create their own by-laws that may not include the necessary criteria for fire safety as mentioned in the NBC. While some of the states like Maharashtra and Goa go over and above the NBC in their specifications for building rules, but nearly 15 states in India do not follow the NBC, rather they rely on their own locally crafted by-laws, which may not adhere to the necessary fire safety norms.

In addition to the regulatory lacunae, many enforcers may not comprehend the NBC, given its technical jargon and voluminous content running into several thousand pages. The need of the hour is to adopt the practice followed in European countries, where any standards or regulation has a concise summary document in simple language that outlines the exact specifications, or create a guidance document for implementation of technical regulations, codes and standards. Also, we need to develop a summary of the NBC in vernacular languages for the benefit of the multitude of enforcers across the country who are checking for the NBC-compliance without clear understanding what the code might involve. Ideally, all officers involved in fire safety should undergo a mandatory training on the NBC, certified by the Bureau of Indian Standards (BIS).

2. Periodic inspections to ensure follow-through
There is no dearth of building codes in the country. This, particularly in states that draw their by-laws from the NBC, a carefully thought-out document crafted by the national and the international experts who have borrowed the best practices in fire safety from various countries. However, what is lacking, is enough trained manpower who can conduct timely inspections to ensure that by-laws are not flouted post approval of the plan or once the building is occupied.

Given their vulnerability to large-scale incidents, periodic inspections are critical for high-rises. For instance, best fire safety practices demand that in a multi-storey building, depending on the number of floors, there should be an empty floor that acts as a refuge area in case of a fire accident. How many high rises have incorporated in high rises in the country? Also, fire and life safety mechanisms like automatic sprinklers, unhindered access to fire exits and staircases are some of the most basic measures that need to be repeatedly examined by competent fire inspectors.

3. Mock drills
According to the National Fire Protection Agency (NFPA), a US-based not-for-profit trade association that evolves codes and standards for fire safety, emergency preparedness in a high-rise building would indicate ’early warning (typically through an alarm or voice communication system), adequate means of egress (exit routes) and occupant familiarity with the plan through knowledge and practice‘.

Panic is the first instinctive response by the occupants to a fire incident, in a high-rise building. Further, rescue operations can take a significantly longer time due to the complexity of the logistics. Mock drills can prove to be life-saving in a real incident, where occupants are trained to evacuate themselves safely even before help reaches them.

Instead of helplessly jumping out of windows, for instance, occupants would know to proceed to the staircase as per plan, prioritizing the people on the floor and those immediately above and below where the fire has originated. They would also know that breaking or throwing open windows are more dangerous, as it would let in fresh air that will fuel the fire. They would be trained to move to an area where the door can be closed behind them to prevent flames or smoke from entering, until rescue arrives. An important corollary is that mock drills are effective only when the owners and management ensure that the safety measures are in place and in working condition at all times.

4. Frequent third-party audits
In many countries around the world, third-party auditors are often roped in by the fire departments for their expertise in fire prevention and suppression. With the increasing pace at which high-rises are constructed in India, hiring independent, third-party companies, with a proven track record in fire safety, can not only overcome the skill gap and shortage of manpower, but also ensure that investigations, in the aftermath of an incident are non-partisan and conducted as per the latest technologies available.

5. Re-look at Response Time Analysis (RTA)
According to a 2018 Response Time Analysis of fire services in the country, the ideal response time for the fire department in urban areas is 5-7 minutes and that for rural areas. Based on the study, conducted by a risk management firm, the parliamentary standing committee has recommended infrastructure development of fire services. However, this RTA is incomplete – it is not only response, but effectiveness of search and rescue that is important. For instance, a fire station near an IT Park that is well-equipped with fire safety measures can be de-prioritized over a densely populated old market area like Bagree. Further, to achieve a critical mass in firefighting standards we need to facilitate a specific study on the challenges faced by high-rise structures – for example, narrow approach roads, that would hamper rescue efforts.

We are now UL Solutions

Advancing safety science and empowering our customers to innovate with confidence.